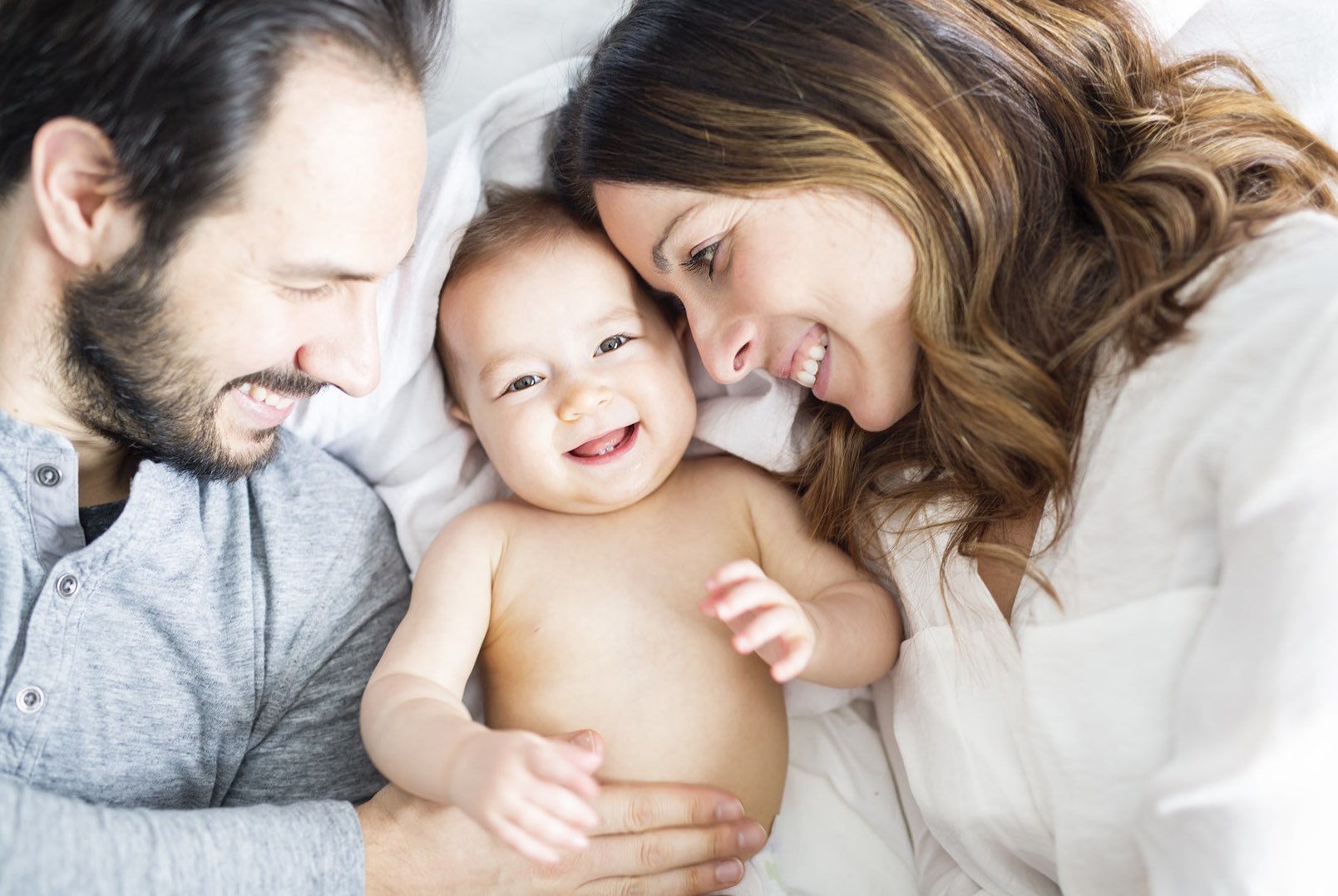 By The Online Dentist25th July 2018 No Comments

This article provides advice from dentists on how you can best care for your teeth during pregnancy and how to care for your baby’s new teeth.

Caring for your teeth and gums during pregnancy may not seem like a priority but it so important. In this booklet, we will describe some of the dental problems you may face during pregnancy and how to avoid damage being caused to your teeth. We will also talk about the exciting bit; when your baby arrives. We want to give you all of the advice that you will need to care for your baby’s teeth during the early years of their life.

‘Morning sickness’ affects the majority of women at some point during their pregnancy. For most women, nausea and vomiting will stop after 14 weeks of pregnancy. Excessive vomiting during pregnancy is known as hyperemesis gravidarum.

The big issue with morning sickness is that the acid from your stomach can attack and damage your teeth. Acid can start to wash away the surface of your enamel and cause permanent damage.

Here are a few tips to help protect your teeth as much as possible from damage.

Your body is going through lots of changes while you are pregnant. The hormones that flow around your body change too. The changes to your hormones will often make your gums extremely sensitive to plaque.

Plaque is a soft build up of bacteria on your teeth and gums. Plaque naturally builds up on everyone’s teeth and it’s the whole reason that we brush our teeth. The bacteria in plaque are what cause tooth decay and gum disease.

The good news is that you can stop your gums bleeding. If your brushing is good, you will remove the plaque and your gums will stop bleeding. Your gums will only bleed when there is plaque on them. Do not be put off by some bleeding while you brush your teeth. The bleeding is showing you where you need to concentrate on brushing better. Cleaning in between your teeth with floss or little brushes is highly effective in improving your gum health.

During pregnancy, some women will get a little growth on their gums. It tends to be pink and round. It’s quite rare but this is called a pregnancy epulis.

If you get any little growths in your mouth, you should visit your dentist to have it checked. If it happens during pregnancy, it could be a pregnancy epulis. It’s nothing to worry about and normally doesn’t need any treatment. After you give birth, this little growth tends to go away on its own.

Seeing the dentist during pregnancy

It’s really important that you have regular dental check ups during your pregnancy. Dentists will often avoid things like dental x-rays while you are pregnant for your peace of mind. However, dental x-rays are generally completely safe during pregnancy so if you do need an x-ray, do not worry.

Dental treatment during pregnancy and up to your baby’s 1st birthday is currently free of charge to mothers.

Your baby has arrived!

You may not be able to see any teeth when your child is born but they have already started growing. The things you do now will help them give your child healthy teeth for life. 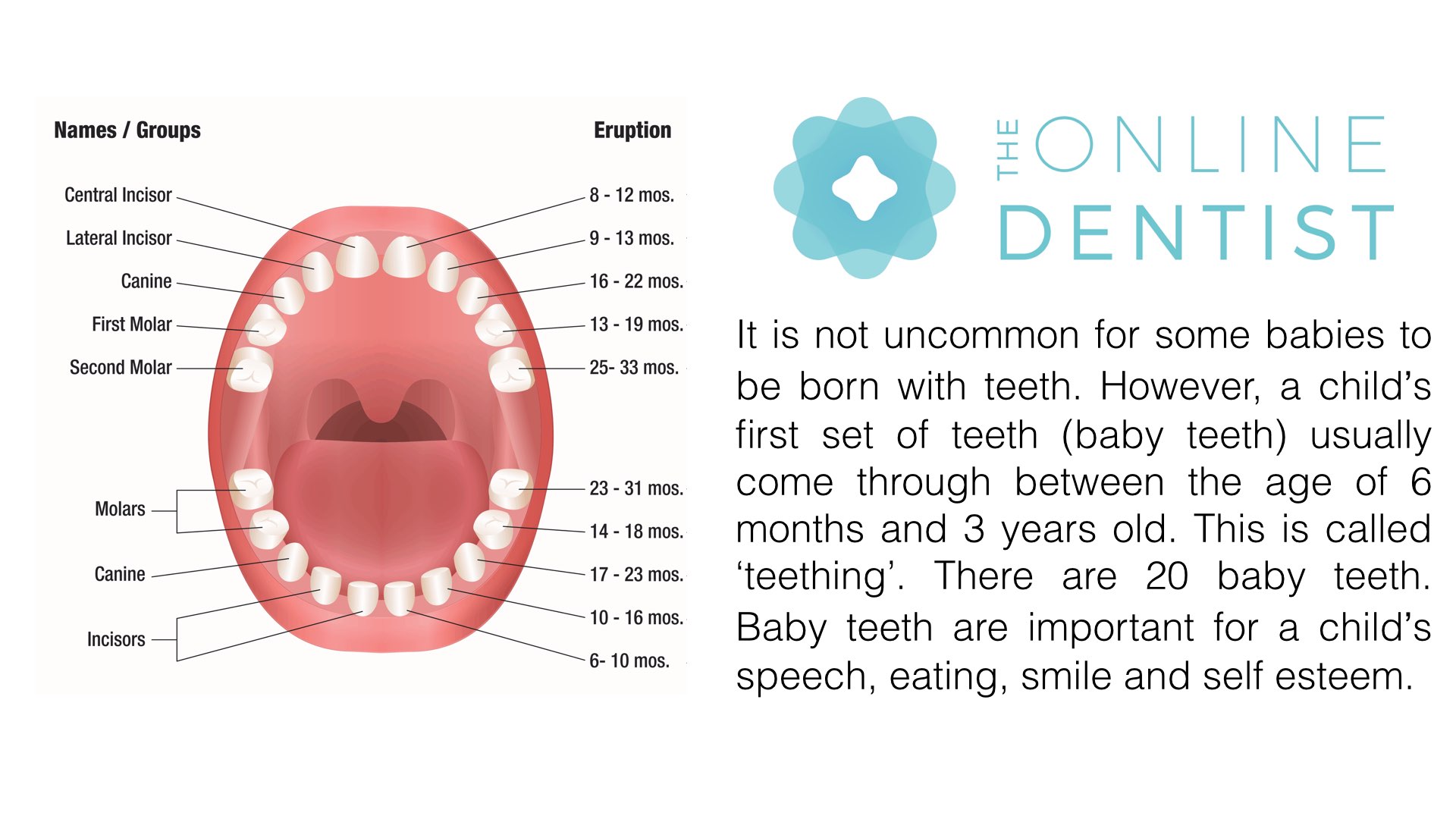 Teething begins around the age of 3-6 months.

To help with teething, cuddles and comfort will calm your baby. It may help to lightly massage the gums with a clean finger or dry toothbrush.

Teething rings cooled in the fridge can help ease the discomfort.

Please consult your pharmacist if you intend to use a teething gel or infant paracetamol for teething babies. Currently, these products are free if you are registered for Minor Aliments at your pharmacy.

Caring for your child’s teeth

Register your baby with a dentist by 6 months or as soon as the first tooth appears. Your baby should visit the dentist at least once by the time they are 1 year old. Often bringing your baby along to their siblings dental appointments can help get them used to the environment from an early stage.

Tooth decay is caused by sugar, bacteria, time and a susceptible tooth. To prevent tooth decay, it is important to brush twice daily using an age appropriate fluoride toothpaste and reduce your child’s sugar intake.

As soon as your child’s first tooth comes through around the age of 6 months, you need to start toothbrushing twice a day with a toothbrush and toothpaste. Toothbrushing should be done last thing at night and at least one other time during the day.

Use a child-sized toothbrush with a small, flat head and soft or medium bristles.

Children can brush their own teeth but a parent or guardian must also brush their teeth until at least the age of 8 years old to ensure a thorough clean.

When brushing, position yourself behind your child.

Children can use an electric toothbrush from whenever they can tolerate it.

Replace your child’s toothbrush once the bristles start splaying apart, generally every 3-4 months.

Toothpaste must contain fluoride. Fluoride acts to harden and protect teeth. This is particularly important for children as new teeth are softer when they first come through. The amount of fluoride that should be in a child’s toothpaste varies depending on their age. Take a look at the table for advice on how much fluoride should be in your child’s toothpaste and how much to use.

Current Advice from the Department of Health

Make sure that your child’s toothpaste is appropriate for their age. If a child swallows too much fluoride while teeth are developing, it can cause the teeth to come through with white or brown marks.

Try to avoid fruit flavoured pastes as these may contain sugar and not enough fluoride.

Tooth decay (cavities) is caused by sugar, bacteria, time and a susceptible tooth.

Everyone’s mouth contains plaque, a soft build up of bacteria. When plaque is exposed to sugars in foods and drinks, the bacteria produce acids. These acids damage teeth by dissolving the tooth surface.

When sugary foods and drinks are consumed frequently, acids are produced more often and damage is caused to teeth. Foods and drinks containing sugar should be kept to a minimum and are best given at mealtimes.

There are lots of useful tools available to help you choose tooth friendly snacks and treats.

helps to make positive food choices for your child and reduce the amount of sugar in their diet.

Nursing bottle decay occurs with prolonged, on demand breastfeeding or bottle-feeding often at nighttime. The top front baby teeth and baby molars are often affected by cavities which, if left untreated, may result in their removal.

It is therefore important to always brush your babies teeth with an age appropriate fluoride toothpaste after their evening feed. Watering down milk in the bottle is a useful way to reduce the amount of harmful milk sugars overnight. Your child should be encouraged to drink from a sippy cup over the age of 6 months and try to avoid using a bottle over 1 year of age. 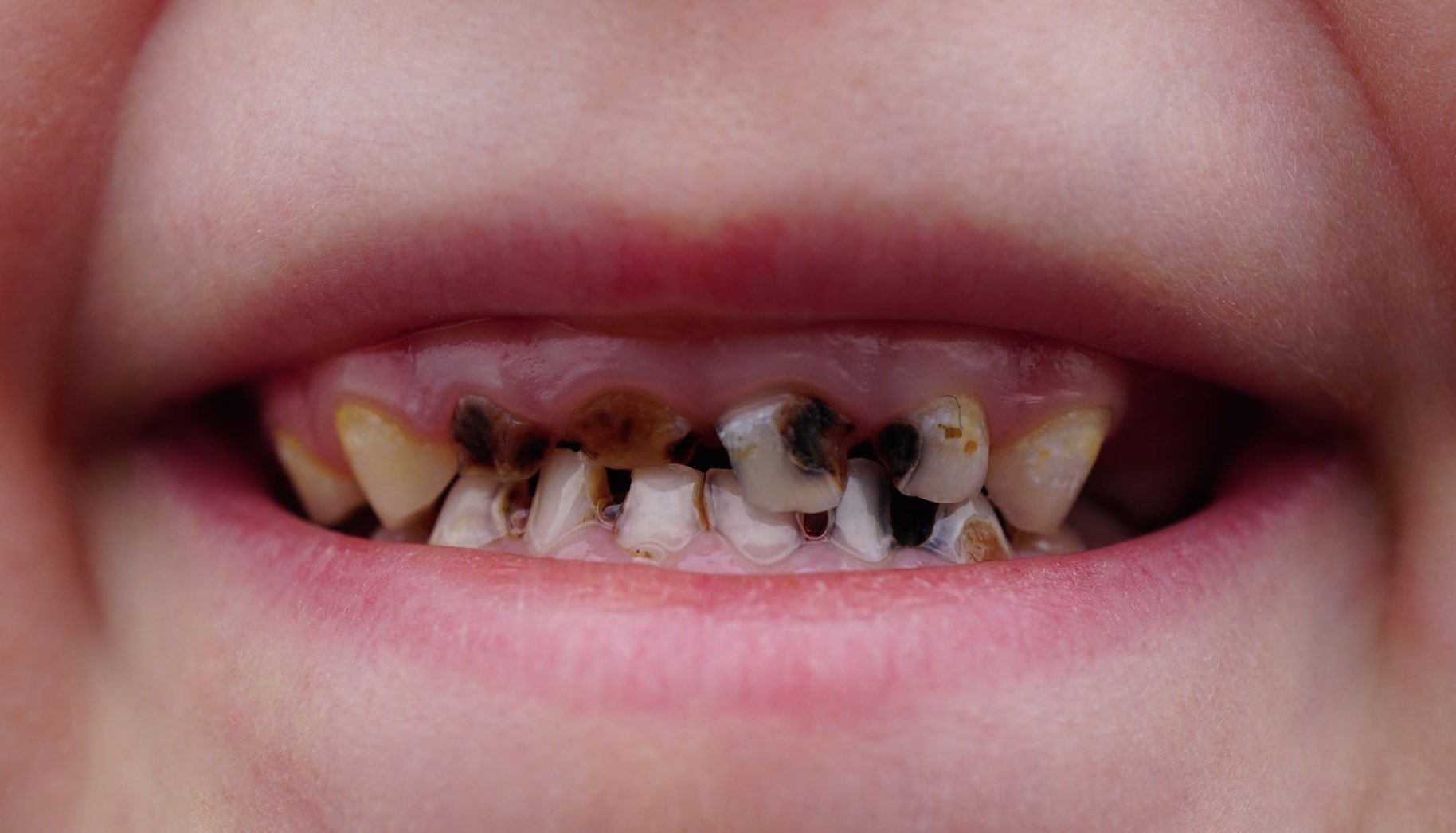 A balanced diet is extremely important when trying to avoid your child suffering from tooth decay. Sugar in foods should be kept to a minimum. There are huge amounts of sugar in fizzy drinks and sweets but did you know that there are hidden sugars in lots of things that you wouldn’t expect? Processed foods and snacks may be damaging your child’s teeth without you realising.

You will already know most of the foods and drinks that contain lots of sugar.

Sugar can be hidden in foods like pasta sauces, cereal bars, dried fruits and raisins so always read the label.

Sugary snacks should be avoided as much as possible and kept to meal times. If children have sugary foods throughout the day, their teeth are under attack all of the time by sugars. This causes tooth decay to grow rapidly.

If your child needs a snack between meal times, try one of these healthy alternatives.

Remember fruit juices and smoothies contain a lot of sugar. Fruits should be consumed whole rather then being juiced, squeezed or blended.

Breast milk or infant formula should be the main drink in the first year of life. Always make formula milk to the manufacturer’s guidelines.

As your child grows older, the only drink they should have between meals is milk or water. Fizzy drinks and squash should be avoided and only allowed at meal times.

For the first 6 months of your child’s life, they will only have breast milk or formula milk. After 6 months, your child may be ready for other foods in addition to milk.

From 6 months, introduce a free-flow cup. Free-flow cups allow the water to drip out when the cup is turned upside- down.

Aim to have your baby drinking from a cup rather than a bottle by the age of 12 months.

Remember, your child’s first tooth is likely to come through around 6 months old so you need to think about their teeth when choosing their food.

Avoid sugary foods. Do not add sugar to any baby foods.

If your child uses a dummy:

If your baby is content, remove the dummy from their mouth. This encourages smiles and chatting and may help when trying to wean your child from using a dummy at an older age. Try and wean children off dummies by the age of 3 as prolonged dummy use can affect baby and adult teeth, which may require orthodontic treatment to correct. It can also affect speech.

I graduated from the University of Sheffield in 2010. I have worked as a general dentist in Leeds, Keighley and Birmingham. I completed a Masters in Dental Public Health with distinction from the University of Leeds in 2016. I have always had a passion for preventative dentistry and firmly stand by the motto ‘prevention is better than the cure’. I am keen to educate parents and improve the oral health of children.

I am the creator of The Online Dentist. My work with The Online Dentist has been featured on BBC Breakfast, ITV news and BBC Radio 5 Live. I have won multiple awards, including National Young Dentist of the Year at the Dental Awards 2018. I practise as a dentist in Central London. 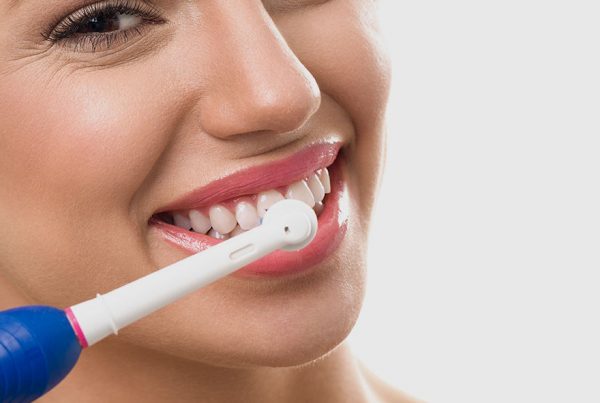 Our guide to tooth brushing

The Online Dentist. | Featured, How to care for your mouth | No Comments
Tooth brushing is the best way we have to remove bacteria from our mouths. The majority of problems with your teeth are caused by bacteria. Bacteria making holes. Bacteria damaging... 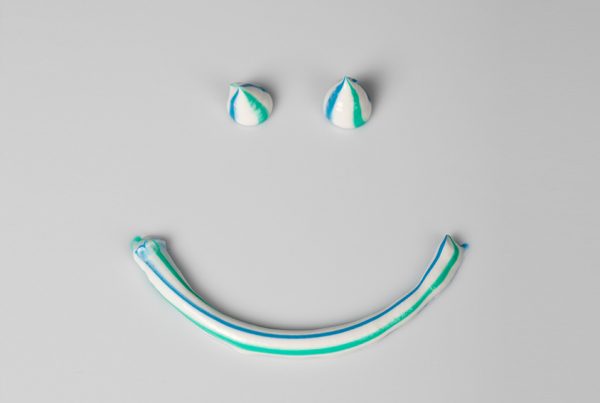 The Online Dentist. | How to care for your mouth | No Comments
This article is all about toothpaste, what should be in it and why you should use it when brushing your teeth. Forgive me but I'm going to start out with... 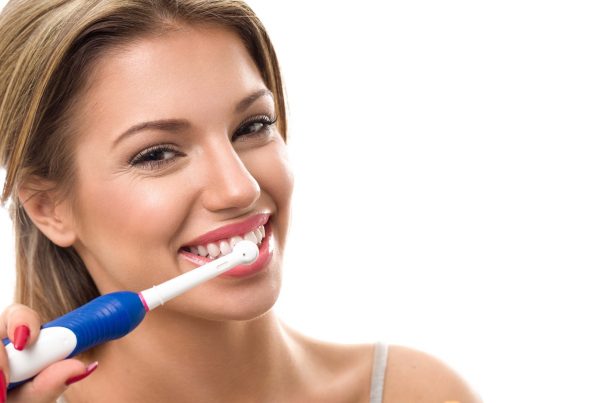